As a Black American I see the Confederate Flag as a direct threat.

June 7, 1998, James Byrd Jr, a Black man 49 years old, tied to the back of a pick up truck and dragged 3 miles. Who did this? Three white men, white supremacist in jasper, Texas. Byrd was alive for 2 miles then his head and arm were decapitated. They left his head at a Black church. The one of the most gruesome racial motivated crimes in US history. How does this relate to the flag? I imagine that pickup truck going fast down that road with Bryd being dragged as the confederate flag attached to truck waving wildly in the wind as the white men yelped and yelled in their thrill ride.

That’s what the flag means to me.

Google, this is awesome…. thank you

What are Sundown Towns?

Sundown Towns are towns that Black folks should not be in at sundown.  Through, whatever means necessary, Black folks are persuaded by local ordinances, intimidation or violence not to live in these towns as be out of town by sundown. It’s an all-white municipality that wants to stay that way. So, Blacks are not welcomed.

What are the names of some Sundown Towns?

Millvale, Pa.  – a suburb of Pittsburgh is known as a Sundown Town. According to Phillip Jenkin’s book, “Hoods and Shirts”, Millvale was the center of a Nazi movement in the 1930s. A local historian remembers that the principal in the local movement was one Edwin “Ed” Flaig. His “Hunter’s Lodge” in Millvale is discussed in a book on American Nazis titled “Under Cover: My Four Years in the Nazi Underworld of America” by John Carlson (1943). For many years, even up to 1996, blacks (and other minorities) were not welcome on the “Hunter’s Lodge” property.

Manitowoc, Wisconsin – This town was known to have signs that stated, “NIGGER: Don’t let the sun go down on you in our town!”  Today the town is 93% white.

Cut and Shoot, TX – A black attorney who lives in Texas reports having seen a sundown sign in Cut and Shoot. TX Resident. “I have seen a KKK recruiting booth on the side of the road at the entrance of Cut and Shoot coming from US 59 in the mid 1990.”

Passadena. Tx– Pasadena, TX had a sign that warned blacks, but used a much more derogatory term, to be out when the sun went down. Ironically, if this is true, Pasadena’s population today is probably 50%, or more, minority.”
A Washington Post reported interviewed a black man who had moved to Pasadena a “neighbor came over and asked, ‘When are you moving out?’ The man, bemused, replied, ‘We just moved in.’ The neighbor replied, ‘I didn’t ask when you moved in, I asked when are you moving out?'” At least one dead cat was thrown on the families lawn. They lasted six months.

Old Homossa, FL– “According to the legend I was taught by inhabitants of Homosassa, just a few short years before I moved there in 1990 there was a sign that had been repeatedly posted and torn down on the only road that leads to Old Homosassa. The sign reportedly stated, ‘Nigger, don’t let the sun set on your ass in Old Homosassa!’ “Also reported by people who had moved there a short time before I arrived, a civil war had raged between residents of Old Homosassa and the local newspaper. Apparently, a young black man had been hired to mow the lawn of one of the town banks just outside of Old Homosassa and in ‘Homosassa Proper.’ Some rednecks in a pick up truck drove by the bank and fired a few shots off at the terrified worker, all the while shouting racial slurs at him. The incident was reported in the local rag, which prompted commentary from readers. As most normal people would be, they were outraged that such an incident would take place in their fair county, and felt that the offenders should be prosecuted to the fullest extent of the law. [Other Old Homosassa residents] rose to defend their citizens’ actions… they flooded the newspaper’s central office with arguments in defense and even support of the incident.” -former Old Homosassa school teacher

Levittown, NY – William Levitt, a real estate developer created the suburban housing development known as Levittown, NY.  From Lizabeth Cohen, A Consumers’ Republic (NY: Knopf, 2003): “In 1953, when Levittown, LI’s population reached 70,000, it was the largest community in America with no black population.” (p. 217) Only 57 blacks by 1960. By 1980, 45 blacks. From Martha Biondi, To Stand and Fight (Cambridge: Harvard U P, 2003): Levittown (on LI) contained a clause in the lease for rental properties: “The tenant agrees not to permit the premises to be used or occupied by any person other than members of the Caucasian race.” (p. 230) The Committee to End Discrimination in Levittown, including some residents, polled and claimed 61% of residents favored admitting blacks. “William Levitt refused to renew the leases of two families, one who had violated the racial policy by hosting an interracial play group, and the other for simply being sympathetic neighbors.”

I understand San Francisco 49ers quarterback Colin Kaepernick  stance on NOT standing for the Star Spangled Banner, that use to be me 45 years old.  Sometimes you need to protest in any manner that you can at the injustice and inhumane treatment of Blacks by whites.   At the age of 15 years old,  I was pro Angela Davis, Martin Luther King, Malcom X and anyone else who was a leader in the struggle for civil rights whether local or national.  As a young Black child, I grew up in an area where white children felt comfortable calling me “nigger” instead of my name.  The worst part was the tone they used when they called me “nigger” like I’m dirt. “Don’t cross my back yard nigger!.”  “ Get your dog nigger!”  In what world is it appropriate to talk to a 7 year old child that way.  You learn to avoid those kids.

I got married at 17 years old and my husband who was 19 years old.  My husband was a marine stationed in Beaufort, SC.  Here I am a Black girl from the North and full of myself, I just graduated high school and I’m going to have a better life.  Well, I never knew the kind of racism I was about to face in Beaufort.  That’s for another blog all by itself. And my only protest was not standing for the Star Spangled Banner and the lowering of the flag on the military base.  My husband begged me to stand for the lowering of the flag or he would get in trouble for my actions.  I gave in but my conviction was stronger after that.

“I cannot stand and sing the anthem. I cannot salute the flag. I know that I am a black man in a white world.”
Jackie Robinson from his 1972 autobiography 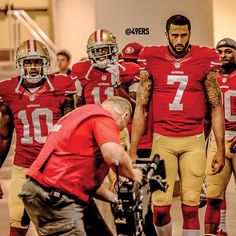