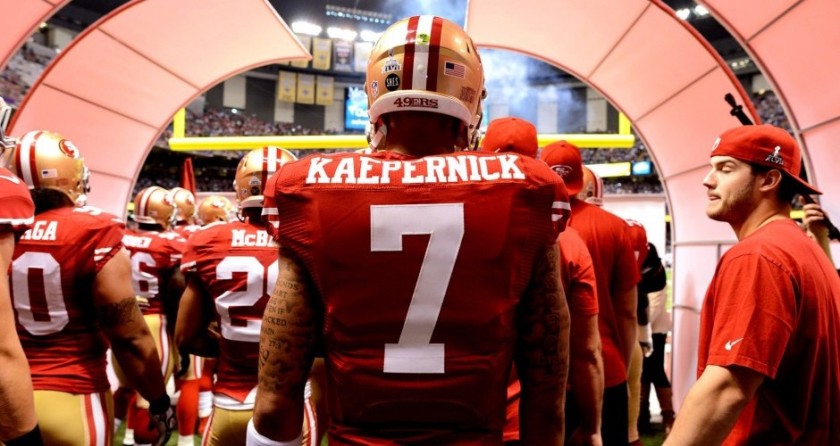 I understand San Francisco 49ers quarterback Colin Kaepernick  stance on NOT standing for the Star Spangled Banner, that use to be me 45 years old.  Sometimes you need to protest in any manner that you can at the injustice and inhumane treatment of Blacks by whites.   At the age of 15 years old,  I was pro Angela Davis, Martin Luther King, Malcom X and anyone else who was a leader in the struggle for civil rights whether local or national.  As a young Black child, I grew up in an area where white children felt comfortable calling me “nigger” instead of my name.  The worst part was the tone they used when they called me “nigger” like I’m dirt. “Don’t cross my back yard nigger!.”  “ Get your dog nigger!”  In what world is it appropriate to talk to a 7 year old child that way.  You learn to avoid those kids.

I got married at 17 years old and my husband who was 19 years old.  My husband was a marine stationed in Beaufort, SC.  Here I am a Black girl from the North and full of myself, I just graduated high school and I’m going to have a better life.  Well, I never knew the kind of racism I was about to face in Beaufort.  That’s for another blog all by itself. And my only protest was not standing for the Star Spangled Banner and the lowering of the flag on the military base.  My husband begged me to stand for the lowering of the flag or he would get in trouble for my actions.  I gave in but my conviction was stronger after that.

“I cannot stand and sing the anthem. I cannot salute the flag. I know that I am a black man in a white world.”
Jackie Robinson from his 1972 autobiography